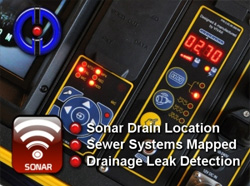 When a drain became blocked years ago it was a case of getting the drain rods out and hoping the rods would reach whatever was causing the obstruction. Once the obstruction was located, the engineer would then have to measure out the distance with the used rods and begin digging, this method was usually reasonably reliable unless there was a sharp bend in the middle of the drain run which would cause the excavation to be way off target. Some of the modern push rod cameras are so flexible that the engineer can negotiate quite a few bends and junctions without too many problems, the only trouble is that you still have no idea where the camera is below the ground.

It is situations like the one described above that gave rise to the modern day sonar drain tracer. This works by having a sonde or transmitter placed in the affected drain, pipe or sewer and sent in the general direction of the blockage. the transmitter of the sonar drain tracer then sends a sonar pulse out and the engineer can follow it above ground using a special receiver. The pulse signal is sent in a circular or arch configuration therefore when the receiver is adjusted so that it is picking up the minimal signal, the engineer knows that he is directly over the top of the transmitter. Some of the earlier units were prone to interference from electric cables but the new ones are extremely reliable and very accurate when operated by trained engineers.

The sonar drain tracing transmitters are often attached to drain rods, carbon line threaders or jetting units and many of the newer push rod and crawler camera units may even have them built in.

Premier Drainage Services Limited often use sonar to pinpoint any defects we have seen in any CCTV camera surveys we have previously carried out prior to excavation. We use the sonar drain tracing device to locate any buried chambers, interceptor traps or septic tanks and they are also very useful for working out the depth of a system at a certain point prior to excavation and repair or renewal of the pipework and drainage connection.

Some of the more up to date sonar tracers can work in cast iron pipes and some even give a digital reading of the depth, some of these sonar systems can work at depths of up to 12 meters.

A cautionary tale before your extension is built

It is very important that building contractors should use sonar drain tracer technology prior to commencing works around existing drainage and sewer systems, unfortunately this is not always the case and when you consider that the onus is on the home owner to prove the sewers actual position, it makes a lot of sense to insist that they carry out the sonar drain tracer test first. This is because if you build an extension within a few meters of a local authority sewer, the local authority will often insist that the line be sonar traced as the drawings they have on file only give an indication of where the drain may be. Woe betide anyone who has to have their new extension demolished because sonar drain tracing wasn’t carried out first. Fortunately Premier Drainage Services Limited can carry out sonar drain tracer work for you so you can rest assured you will never need to worry about falling foul of your local authority.

If you need a rapid response to your drain problem then call us today on 01438 222 758 or fill in our contact form to get a FREE QUOTE.

We provide drainage services throughout Hertfordshire, Bedfordshire, Essex and London.

or fill in our contact form to get a