So why do drain pipes get blocked? 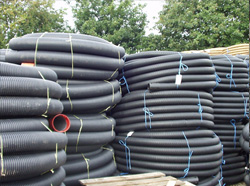 A large percentage of domestic drainage systems throughout the United Kingdom are made up of 100 mm and 150 mm vitrified clay pipe work and for the most part these systems do a very good job of carrying waste and storm water from one point to another. Most drainage pipes will from time to time, develop some sort of defect such as a misalignment of the pipework joints, stepped joints, dipped sections of the pipework, fine and tap root ingress through the pipe joints that cause the pipework to fracture or leak. You would think that all the problems above would be quite serious and any one of them would prevent anything from flowing through the pipework, but quite often this is not the case.

The reason for this can be down to a number of reasons. Drainage pipework frequently get blocked and clear themselves due to the weight of water that builds up in the pipe system itself, other pipework systems can operate in a similar way to a septic tank for many years given the right ground conditions with the majority of the waste water soaking into the sub soil through defective joints while solids and waste breakdown within the pipe work.

With the above scenario in mind, the drainage system and pipework of a standard three bedroom house can probably cope with a weekly bath and a small sink full of waste water per day pretty easily, it will just soak away into the surrounding ground from any leaks. However, should you put an entire family in their with all the baths, showers, washing machine and dishwasher waste and the volume of water will go through the roof, causing a serious level of groundwater to remain as it cannot drain away effectively.

Many drain pipe blockages are caused because of a lack of maintenance and bad habits around the property, the more serious problems don’t usually to happen overnight, so it’s worth regularly checking the system by lifting any external manhole covers a couple of times a year. By doing this, you may not stop the final blockage but you may well see the problem before it becomes critical.

There are several things you can do to avoid blockages! Just do not put anything into the drains that will not dissolve or break down, many people seem to think that because it says disposable on the packet you can pour it down the sink or flush it down the toilet and it will disappears. Disposable nappies, cotton buds and the like are not meant to fit around the U bend and into the drainage system or pipework. They probably will go if you try hard enough but then they are likely to stop at the first snag point within the pipework and block the entire system.

These are the drains that are usually located at the side of the property where your rain water and kitchen and bathroom waste pipes lead to. These gullies should have a water trap on them that is similar to the way a toilet operates, the trap is there to stop any smells from the main sewer and hopefully it should stop rats and other sewer dwelling vermin from coming up through the pipes.

It is always good practice to clean out the gullies occasionally as grease, fat and fibres from sinks, washing machines and dishwashers can solidify in waste gullies, blocking the free flow of water and causing terrible smells. Fallen leaves can also clog up the grid top and prevent water from getting into the gully pot so again an annual clean is very wise as is making sure that the plates going into the dishwasher or sink have as little grease or food scraps on them as possible.

Grease And Fat In Drainage Systems

Grease and fat build up within domestic drainage and pipework systems over the years and reduce the internal bore of the pipe until it eventually blocks, a bit like smoking clogs up the arteries of the human body.

Dishwashers that have been installed correctly should help to breakdown the grease and fat due to the high temperature of expelled water, although in reality, people are a little less careful about how clean their plates and cutlery are as they are loaded as opposed to sink washing up.

As a rule, only attempt to flush away human waste and small amounts of biodegradeable toilet paper. People in the United Kingdom are often disgusted by the European method of placing soiled toilet paper into a bin for disposal. In some countries it is even an offence to flush paper down the toilet. We try to use our toilets as a sort of all singing and dancing waste disposal unit. I have known people to flush away their used oil and fat simply because the pipework is so wide, surely that would never block! Want a bet!

Toilet flush blocks that clip over the side of the toilet bowl are a constant reason for a lot of our call outs, they fall off and get lodged either in the U bend or further down the pipework. Try and stick to the ones that fit in the toilet cistern as they are less likely to be knocked into the toilet. Most toilet blockages are due to a foreign object being stuck in the u bend or pipework further down.

When we are called to a blocked toilet it is not actually the toilet that is the problem, the problem is usually outside and further down the system but the water level in the pan is affected due to trapped air within the drainage and pipework system.

If you allow grease, fat and food particles to get into your pipework, sooner rather than later you are going to have a pipe blockage. The pipework that carries waste from the sink have traps and bends and it takes very little to block them. So give the plates a thorough scrape before you put them in the sink or dishwasher.

Soap and hair are the main causes of blockages in the bath or shower but again a little maintenance can prevent unnecessary blockages. Always remove any hair that has collected in the plug hole area instead of poking it through.

Misaligned or broken drain joints in the pipework system are a major cause of blockages and they will need to be dug up and fixed by a professional before the problem becomes too severe. Call Premier Drainage Services Limited for a free no obligation quote today.

If you need a rapid response to your drain problem then call us today on 01438 222 758 or fill in our contact form to get a FREE QUOTE.

We provide drainage services throughout Hertfordshire, Bedfordshire, Essex and London.

or fill in our contact form to get a